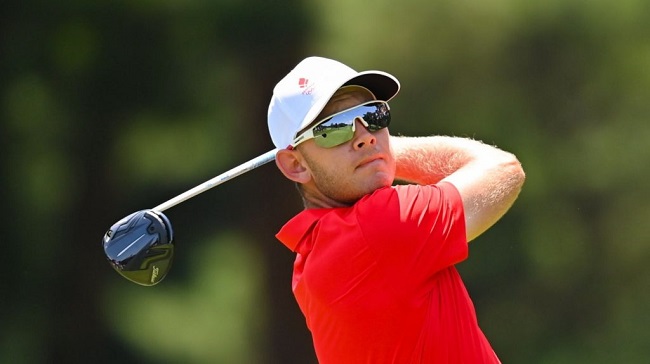 Golfer Hansen leads by one stroke after the first round of the Dubai Desert Classic.

On Thursday, Danish golfer Joachim Hansen scored a flawless 65 and finished the first round of the Dubai Desert Classic at seven under par, giving him a one-shot lead.

Hansen, rated 110th, shot a string of four consecutive birdies to move into second place, one stroke ahead of South Africa’s Justin Harding, who was on the 18th hole when play was called off due to darkness.

Hansen has found success in Dubai recently, winning his second European Tour victory at the AVIV Dubai Championship in November of last year and then finished tied for ninth at the season-ending DP World Tour Championship in the same city.

He lamented that the lack of tournaments at the end of the year prompted him to keep playing: “I try to keep it going.” “At this point, I’m more confident in myself and can let go a little bit.

But I’ll still need to be in very terrific golfing shape if I want to play here in 2023.

In other words, I’m just giving it my all that I can.

I managed to keep it going. While I wasn’t the best behind the wheel, my putting was outstanding.

Collin Morikawa, the defending British Open champion, shot a final round 68, finishing one stroke behind a group of five players tied at five under par 67 that included the 2017 champion, Sergio Garcia of Spain.

After starting the day at seven under, Morikawa’s advantage quickly evaporated due to three bogeys in his final four holes.

In the end, it was a disappointment,” Morikawa remarked. Not overjoyed with a score of four under, but satisfied.

But it was rewarding to see my efforts pay off on the course.

A four-time champion at the major tournaments Rory McIlroy shot a final-round -1.

Pagunsan, at 43 years old, was the second Filipino golfer to compete in the Olympics, following Miguel Tabuena.

He tied for fifth and sixth place with Joachim Hansen of Denmark and Jhonattan Vegas of Venezuela.