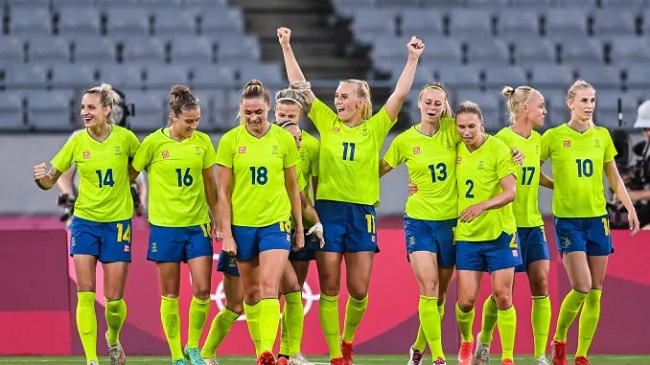 As to why Lieke Martens should win the Ballon d’Or Féminin in 2020–21.

Since the 2019 World Cup, Lieke Martens’ starting spot for FC Barcelona has been uncertain.

During the first half of the 2019-20 season, Martens was sidelined with a toe injury; just as she was starting to get back to full health in February of 2020, the pandemic struck.

Lieke Martens was used sparingly as a starter in the 2019-20 season, but she was a critical replacement in the league and Champions League matches the following year.

Lieke played her way into a starting role and consistently delivered in pivotal moments throughout the season.

To help Barcelona win their first continental treble, she was directly responsible for three of the team’s four goals in the Champions League final and three more assists in the Copa de la Reina final.

She also represented the Netherlands in international competition in this summer’s Olympics, the only one of Barcelona’s five nominees to do so.

Lieke Martens’s two Years with Barcelona have been Eventful to say the Least.

She missed nearly half a year of club play due to a toe injury sustained at the 2019 Women’s World Cup. Though she returned to blazing form after a February 2020 injury, the world was already in lockdown due to the COVID-19 epidemic.

Once August rolled around and Barcelona resumed 2020 Champions League play, she was benched for their crushing semi-final loss to Wolfsburg.

The narrative was the same for the second half of the 2020-21 season, even though Lieke did not suffer any injuries during the first half.

Half of her season was spent on the bench, since Llus Cortés preferred Mariona Caldentey for her greater strength in the middle of the field rather than on the wings.

Lieke made the best out of a bad circumstance. When Barcelona’s new local rivals Real Madrid Femenino kicked off their season, she came off the bench to score the game-winning goal.

She also played in both of Barcelona’s Champions League Round of 32 matches, making an immediate impact with a well-taken volley against PSV Eindhoven in the season opener. She extended her hot streak in the UWCL by scoring twice in the rematch with the same squad.

Lieke was a substitute up until about March, when she became a “super-sub” and started scoring in nearly all of the crucial games in which she was substituted. She scored in the first competitive match ever played between women at the Camp Nou, as well as in matches against Real Madrid and Atlético Madrid.

Lieke’s game style has never changed, but she felt more at ease once she began to play regularly again. By the end of the season, Lieke had established herself as a starting player for Barcelona, primarily on the left flank, her natural position.

Her movement and vision sharpened, her output increased, and her defensive efforts strengthened.

For Lieke, his most impressive performance came in the Champions League in the previous season. Although he was left on the bench for Barcelona’s match against Manchester City, Lieke contributed significantly to the team’s semifinal victory.

By scoring twice in the second leg at the Estadi Johan Cruyff against Tiane Endler’s PSG, she single-handedly ensured Barcelona’s 3-2 aggregate victory and a spot in the final.

Lieke Delivered a Career-best Performance in the Championship game Versus Chelsea.

Just seconds into the game, Lieke launched an attack up the left side and fired a shot that smacked off the crossbar. Barcelona scored the game-opening goal with this shot.

Fran Kirby took a shot that ricocheted off of something and was cleared by Caroline Graham Hansen.

Kirby attempted to clear it by hurling it directly towards Melanie Leupolz’s thigh, which went through the uprights and into the top left corner, capping off a gorgeously wild sequence.

Every single Barcelona attack came from Lieke’s left, as was obviously the plan.

Lieke tore through Chelsea’s defence at every available opportunity, capitalising on the inexperience of Niamh Charles.

She went up the wing, dribbled past Charles, and crossed the ball into the box, where Jenni received it, passed it to Alexia, and finally set up Aitana for Barcelona’s third goal.

For Barcelona’s fourth goal, Hansen scored on a tap-in after Lieke made a similar run, gliding past Chelsea’s Charles and into the area.

Barcelona’s 4-0 victory was sweet revenge after the team’s 1-4 loss in the 2015 Champions League final.

Since the UEFA Women’s Champions League is played over two legs, Lieke’s performance in that final was the sole reason why her team was able to win by the largest margin ever in a single-leg final.

She was instrumental in Barcelona’s run to the final of Spain’s domestic cup, the Copa de la Reina, scoring multiple goals in the semi-finals. Her hat trick of assists in the championship game versus Levante was her most notable performance.

With her help, Barcelona won 4-2 and became the first club in history to win the European Cup, Champions League, and European Cup in a single season. At the end of the competition, she had the most tournament assists (five).

By the end of the season, Lieke had set a new league record for most goals contributed in a single season. She not only scored 15, but also helped on another ten. Over the course of 36 matches across all competitions, she contributed 35 goals (20 goals, 15 assists).

Lieke was a Pivotal Figure in the Netherlands’ Olympic Team.

The Dutch were eliminated in the quarterfinals by the eventual champions Americans, with Lieke missing a penalty in regulation time that could have proved decisive.

The Netherlands achieved history despite being eliminated from the Olympics so early.

Her Strong Play from last Season into this one with Barcelona has Continued.

She has now gone 13 games without failing to score or assist in a game since their most recent meeting against Levante. After all that, she received the Tuttosport Golden Women’s Player award and was a finalist for the UEFA Women’s Player of the Year award.

Although she spent much of the season on the bench, Lieke enjoyed her greatest season ever with Blaugrana.

When it counted most, she excelled; she was Barcelona’s primary source of offence in both championship games. Without Lieke as their leader, neither of her teams would have achieved such unprecedented levels of success.