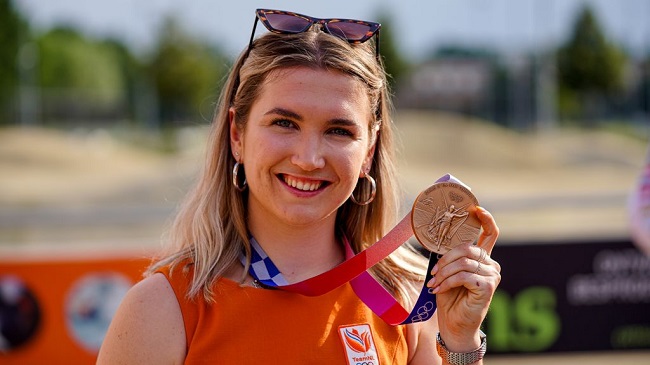 Day 1 of the Tokyo BMX Grand Prix saw the favourites make their mark.

The time is now. Now was the time that Every top BMX Rider had been Training for:

The Olympic Games. Even if the world’s best BMX riders will have to wait an extra year for the commencement of the Olympic Games in Tokyo 2020, that won’t take away from the drama of the story.

This, however, meant that there could be no spectators in the newly constructed grandstands at the Ariake Urban Sports Park for the Covid-19 event.

Signs announcing the world’s largest athletic event can be found all over Tokyo, and helicopters are constantly circling the city to keep up with the action below. As an integral feature of the Olympic Games, BMX is worth seeing.

The Quarterfinals were Conducted on Thursday, July 29 and Included a total of 24 Men and 24 Women.

Each gender’s competition featured four heats of six runners who each went around the track three times. Four riders from each heat advanced to Friday’s semi-finals, where the starting lineup for the last BMX race of the Olympics will be determined.

It may sound simple to finish in the top four after only three laps of a quarter-final heat, but just one of those heats featured riders like David Graf (SUI), Carlos Ramirez (COL), Giacomo Fantoni (ITA), Connor Fields (USA), Anthony Dean (AUS), and Alfredo Campo (MEX) (ECU).

It’s not easy to make it to the end of a race that features multiple UCI BMX Supercross World Cup champions and the 2016 Olympic Gold medalist from the United States of America.

The track is difficult, with rollers and massive bends, as well as sharp lips on the double jumps.

Adding the stress and strain of being at the Olympics increases the likelihood of an error. The track at Tokyo 2020 is 495 metres in length, thus physical preparedness is just as crucial as a fast start if you want to win the race.

Athletes had four days of practise to acclimate to the track’s Pro section, located on the third straight, and its smooth, fast pace. After two rounds, the Japanese riders had a good sense of who they were up against, which is an important part of the difficulty of BMX racing.

Twan van Gendt (NED) rode a geared BMX bike to the hill and won both of the men’s first two runs at the UCI World Cycling Centre (WCC) race in Aigle, Switzerland.

His Countryman Niek Kimmann also Rode back from a bad Crash earlier in the Week to finish Second.

Also, in their first two runs, David Graf (SUI) and Connor Fields (USA) switched places. Joris Daudet and Sylvain André, two French runners, got off to a strong start by winning both of their quarterfinal heats.

In the women’s competition, both Laura Smulders of the Netherlands and Felicia Stancil of the United States looked fast and smooth in the first two runs of their heat.

Bethany Shriever of Great Britain demonstrated that she is serious about making the podium in Tokyo throughout the practise days coming up to the quarterfinals.

Like everyone predicted, Alise Willoughby (USA) is hungry for more and came out on top both times; likewise, ‘Queen of BMX’ Mariana Pajón (COL) is eager to go for gold again and could win her third BMX Olympic gold medal in Japan.

Due to the three-round format of the Olympic quarterfinals, every heat was a fight for the remaining qualifying berth for Friday’s semi-finals. Andre, Kye Whyte (GBR), Romain Mahieu (FRA), and Corben Sharrah (USA) all advanced from the men’s first heat, which featured a deep field.

Yoshitaku Nagasako, a trainee from Japan at the UCI WCC, did not leave despite racking up 12 points (5-4-3 finishes) without transferring.

After a collision in the final round of heat 2, UCI WCC trainee Simon Marquart (SUI) was sent home while Nicholas Torres (ARG) and Vincent Pelluard (COL) advanced thanks to a combined 13 points.

With a miraculous second-place result in the third run, Alfredo Campo (ECU) advanced to the semifinals after finishing sixth and fourth in the first two rounds, respectively.

Mariana Pajon, Laura Smulders (2-1-1), Bethany Shreiver (1-1-3), and Alise Willoughby (3-0) all made a splash in the women’s competition (1-1-1). Shriever’s timing of 44.660 seconds was the best of the competition, and that was on a challenging, long track in temperatures of 31 degrees Celsius.